How the Villain Stomped on My Outline

I outline.  In the world of writers, I am a plotter, not a pantser, an architect, not a gardener.  For the most part I follow my outline, though the story usually stretches and grows as I go along and new, juicy ideas are added.  I’d never really run into the well-known phenomena of a character refusing to do as I wanted—until Soul of Kandrith.

After having written book one, Gate to Kandrith, I knew my two main characters quite well.  Lance may have grumbled a bit, but neither he nor Sara gave me any serious trouble.  All was going along swimmingly until my villain, Nir, the high priest of the God of War, strode onto the scene.  He snorted with contempt at my neat little outline.  “That wouldn’t stop me,” he said, and he stomped it flat.  His actions wrenched the storyline into a much darker place than I had originally intended to go.

When I sat down to do the second draft, I made a note to myself: “Make this less dark.”  And I tried, I did, but Nir dug in his heels and refused to cooperate.  I eventually conceded that he was right, that it would be out of character for him to act the way my outline dictated.  And the darkness and peril made the storyline more compelling.  Furthermore, I came to realize that lightening the darkness too much would take away from my themes of slavery and sacrifice.  So I let it be.

So when you reach that section, just remember it wasn’t my fault.  It was Nir’s.  Blame him.  Hate him.  And cheer when he gets taken down at the end. 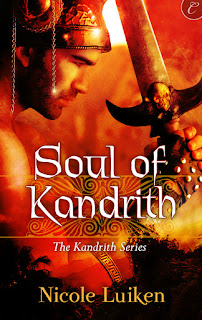 Amidst the escalating dangers in hostile territory, Lance will have to risk both his beloved and his homeland in a final gambit to save them both…