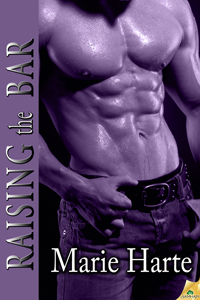 RAISING THE BAR ~ following Enjoying the Show and Closing the Deal

Dr. Dylan Warren is too old to be swapping places with his twin, but to save a career-making deal, he’ll play his part. He hadn’t counted on a sexy, nosy contractor being able to tell the difference between them. In order to protect his brother’s reputation and explain his side of things, Dylan agrees to meet with Harper for dinner—in an upscale Victorian which turns out to be a high-class club catering to their patrons' every need.

Dylan has never made any bones about being bi, but he’s never experienced two lovers in his bed before. Suddenly, he’s in lust with not only Harper, but the hot bartender serving him more than drinks. Between Freddy, a beautiful woman who seems to know him better than he knows himself, and Harper, a man who won’t take no for an answer, Dylan finds himself in that most uncomfortable of places—falling in love and not sure what to do about it...with two people.

Coming to Samhain March 5th!
And a new contest to celebrate the release as well. Don't miss it!
Link

The Trouble With Finding Books Online - And A Few Solutions: "With the glut of self-published books on the market, the biggest obstacle for authors is discoverability – to rise above the noise and clutter and distinguish one’s work. A Rotten Tomatoes sort of rating system seems inevitable."

Scaling back the Nook e-reader would be bad news for book publishers: "Barnes & Noble’s losses are prompting the company to consider scaling back its Nook business to instead focus on licensing its content catalog to other device makers..."

Dead Writers Perfume smells exactly how it should: "a scent that should evoke, "the feeling of sitting in an old library chair paging through yellowed copies of Hemingway, Shakespeare, Fitzgerald, Poe, and more.""

Unicorn hoof boots to sexually excite the fantasy horse fetishist in us all: "Turn your ugly human leg into a gorgeous unicorn or dragon leg."