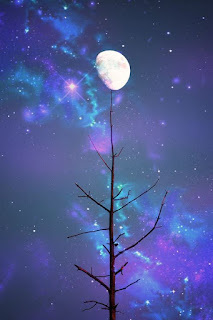 Alaman found her outside, sitting on the deck in one of the lounge chairs. Smiling, he opened the back patio door and went to join her. It didn’t take him long to discover why she was out here.

“I should have known this was where you’d be. Observing another full moon, my love?”

Veelancia glanced over her shoulder. Her deep green eyes shone like two tiny lanterns that allowed her to see in the dark. “Would you kill the lights inside, please?”

He replied by waving a hand behind him, and the cabin went dark.

It was as if that signaled the universe to pump up the power, and the Milky Way burned with greater luminosity overhead. But the brightest glow came from the beautiful sherbet orange-colored orb hanging above the treetops.

A scraping noise let him know his wife had brought the other lounge chair around the pool and set it beside her. He eased himself down in it to join her.

“All right. Tell me what I’m looking at. What’s it called this month?”

She laughed softly. The sound of it made his heart flutter. No matter how many years they’d been together, her gentle laughter always affected him that way, and always would.

“This won’t surprise you, but it’s called the Harvest Moon,” she replied.

“Of course. This is the time of harvest.”

“Didn’t you say last month’s moon was the Barley Moon?”

“They’re interchangeable,” she acknowledged. “Just like you can sometimes call the full moon in October the Harvest Moon.”

Alaman let out a bark of laughter. “How do you manage to keep track of all that? Why does it have to have a name, anyway? To me, a full moon is a full moon.”

“Why do you pay so much attention to when the equinox occurs, you with your spells and potions?” she countered.

He knew that tone, and chuckled as he stared back up at the glittering panorama above them. “Well, it’s the perfect night for moon gazing. The rains have let up long enough for us to get a cloudless sky.” He started to breathe in the surrounding scents when he paused. “Unless you…”

“No, I didn’t have a thing to do with the weather…this time,” she quickly countered.

He chuckled. “Anyway, I’m glad autumn will soon be here. I like the summer, but not the sweltering nights.”

“I like the cooler, crisp days, too.” She smiled at him. “Remember that one September night a few years ago?”

How could he forget? He could almost feel the blood rushing to his extremities as he recalled their first time together. The perfection of it. The love between them. It hadn’t been long after that when he asked her to marry him.

The sudden irritation in her voice drew him out of the memory. At the same time, he heard a soft zzt!, accompanied by a tiny flash of light.

“Speaking of rains and sweltering nights…” she began. In the bright moonlight, he saw her gesture again. It was answered with another zapping sound and pinprick of light occurring almost in front of her nose.

“Woman, are you seriously taking out mosquitos one at a time?”

“Humor me. It gives me delicious satisfaction to get them back for trying to bite me.”

“You know there’s an easier way to keep those pests off of us, don’t you?” Lifting his hands, he made a spreading motion. A thin web of the palest yellow spread upward and outward until it became a protective dome that settled over them.

Veelancia cast him a disapproving eye. “You sure know how to take all the fun out of bug killing.” She pointed above them. “And that blanket you put up is blocking our moon.”

He could tell she was somewhat teasing, but there was also an underlying tone of annoyance. “If I dismiss it, the mosquitos will return.” He had to say it even though he knew she was already aware of the consequences. To his amusement, she waggled the fingers of one hand, creating a thread-like pattern that wove above her fingertips.

“Then I challenge you to a shooting contest. Loser has to conjure up dinner tomorrow.”

Alaman felt the smile spread over his face. “Is that all? Why not make this more interesting? Raise the stakes a bit.”

Her eyebrows rose. “Name it.”

“Winner gets to pick the position.”

A simple wave, and the net disappeared like wet cotton candy.

For the next hour, they zapped every mosquito that dared to approach the two sorcerers, and the air flickered like celebratory sparklers. Neither of them kept score. It wasn’t necessary or important. What mattered was this moment in time, on a balmy September night, with just the two of them, and the memories they were creating underneath the glow of the beautiful Harvest Moon.
Linda's Website