Yes, it's once again time to greet one another with that time-honored greeting: May the Fourth be with you!

I've been thinking A LOT about Star Wars lately--episodes 4 through 6--the ONLY episodes that exist in my world. Because they're so beautifully plotted. Individually they each follow a standard 3 act format, but TOGETHER--they also follow a standard 3 act format. Which is a technique I'm TOTALLY borrowing for my current project; a long neglected story I've titled Love Among the Runes, which features a city cop who's been accidentally possessed by the spirit of an ancient Norse god.

I'm planning on releasing the first act (AKA the first story in the trilogy) in August and I'm soooo freaking excited about it!

What do a Norse god, a Dixie cup and a hot blonde have in common? They're all instruments of one man's destruction.

Meet Officer CJ Maclaine, currently serving a life sentence as vassal to the Norse god Loki. For the past fifteen years, CJ has had one goal in life: find a way to free himself from the trouble-making god who's been making his life a living Hel.

But when he finds himself suspected of murder, and it looks like the next victim might be his partner, CJ realizes there are worse ways to go through life than with a deity on speed-dial. 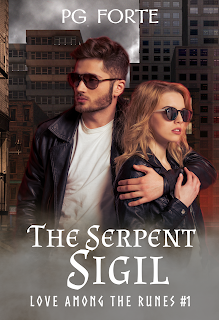 Book One: The Serpent Sigil

Officer CJ Maclaine is having a rough week. He's managed to piss off nearly everybody he knows--including his commanding officer, his partner, her brothers AND his favorite bartender. Worse yet, the bully who'd tormented him when they were both kids has just crashed back into his life--and is looking for a handout.

And that's all before the demigod who's taken up residence in CJ's head discovers the dark web and starts using it to trade in cryptocurrencies and illegal drugs.

Some days it really doesn't pay to get out of bed.