PG Forte:  I'm currently working on a new short Christmas story set in my Winter Hearts Steampunk world. When it's done (hopefully by week's end) Winter World of Love will be available ONLY to members of my FB Readers Group, The Crone's Nest. Here's a sneak peek at the cover and an excerpt. Link to join the Crone's Nest will appear below. Enjoy! 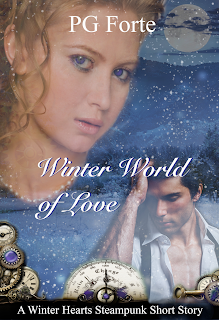 Ophelia rubbed her sleeve across the glass of the airship’s porthole hoping that if she cleared away the condensation, the view outside would improve. But to no avail. The wintery landscape—rocky earth lightly dusted with snow, stunted trees and gray-green shrubs—continued to flash by at a dizzying pace. “Dario?” she called—but quietly, trying to keep the alarm from her voice. “We seem to be traveling extremely fast.”

“Amazing, isn’t it?” Her husband, perched beside the pilot’s seat, flashed a smile at her over his shoulder. “I told you the ride would be smooth. Why, it hardly feels like we’re moving at all.”

“Yes,” Ophelia repeated faintly. “Amazing.” She folded her hands in her lap, in an attempt to project poise, but the cold weather—or perhaps her own inner tension—caused the fingers of her injured hand to twist and bend at such odd angles that the resultant jumble of digits looked ridiculously awkward. She grabbed her muff from the seat beside her and thrust her hands inside, where at least she’d be spared the sight of them.

“What’s wrong?” Dario asked gently. “You’re not frightened, are you? Because, I assure you, we’re quite safe.”

“Frightened?” Ophelia forced a smile. “Oh, good heavens, no.” She clenched her hands together a little more tightly. “I’m just…surprised, that’s all.”

There was absolutely no sense in arguing the point. Of course, Dario believed them to be safe. She had no idea why he thought that needed saying. Not when he was currently demonstrating that belief by allowing their eight-year-old son to pilot the airship.

But a belief, no matter how sincerely it was held, was not a fact. And it just so happened that Ophelia had her own thoughts on the wisdom of entrusting so important and delicate an operation to a child. Regardless of how intellectually advanced said child happened to be. “But, even so, this rate of speed is surely not necessary?”

“Maybe not, but really, Lia,” Dario chided. “There’s nothing at all to worry about. I promise you! This ship could easily go much faster. I’d be happy to show you, if you’d like.”

“Oh, pray, do not!” Ophelia protested. “I find this present rate of speed quite sufficient. Really, I do.”

“I’m forgetting. You’re used to traveling only on very large ships, aren’t you? Very well.” Dario tapped one of the levers on the control panel. “Here, Arthur. This one—the throttle—pull back on it a bit. Yes, like that. There’s a good lad.”

“The thing to remember about big ships,” Dario said, addressing Ophelia once again, turning his back on Arthur even as the boy matter-of-factly slowed the ship to a less nerve-wracking speed. “Is that they’re harder to maneuver. It takes more time to alter their course, more space to turn them. So, of course they move more slowly—they’d have to. They also tend to have relatively weak engines and, much like traditional sailing ships, they rely largely on the wind to take them where they need to go.”

“I’m sure you’re right,” Ophelia allowed, recalling the ponderous transcontinental cruiser that had brought her here. Old, and not in the best of shape, every minute it had stayed aloft had seemed a miracle. Had that fateful, and perilous-seeming, voyage really taken place only a year ago? It seemed a lifetime had passed since then. So much had happened. So much had changed. “However—”

“This little craft, on the other hand, besides being smaller and more responsive, was designed with an aerodynamic shape that lets it slice through the air with very little resistance,” Dario explained, clearly warming to his topic. “Also, for its size, it boasts an extremely powerful engine. If you’d just let me demonstrate, I’m sure I could make you feel more comfortable.”

Ophelia shook her head. Why could not Dario understand that it would make no difference? It didn’t matter how powerful the engine was, or how smooth the ride. It wasn’t even really the speed, per se, that frightened her, or even the fact that it was her baby who held their lives in his inexperienced hands; it was the thought of them falling out of the sky, the pain they’d experience upon impact, the all but inevitable bursting into flame. Having literally crashed and burned a year ago, albeit not while in an aircraft, she felt her fears were not unreasonable.

Of course, she hadn’t exactly communicated those fears to Dario because…oh, because she didn’t want him to fuss. She didn’t want it to be one more thing about her that needed fixing. She wanted him to stop looking at her like she was a failed project and more like, well, a lover. A wife. As someone desirable; not someone who was merely hopelessly flawed.

“Papa—look!” Arthur interrupted, briefly stopping his mother’s heart (and, not incidentally, proving her point) by gesturing at something beyond the ship’s front windscreen, and letting go of the steering wheel as he did. “Horses! But why are they out here all on their own? Are they escaping?”

“Where?” Dario leaned in for a better look, casually reaching out a hand, as he did, to steady the wheel before it could begin to spin on its own and send them all tumbling to their deaths. “Oh, yes, I see them. No need for alarm, my boy. I believe that’s a herd of wild mustangs you’ve spotted.”

“Wild? D’you mean they don’t belong to anyone?”

With his free hand, Dario ruffled his son’s hair. “On the contrary, Arthur. They belong to themselves. Which is as it ought to be for all God’s creatures.”

Ophelia felt a surge of emotion. This easy relationship between Dario and their son—the son she’d denied him for so long—the implicit faith, trust and affection, the shared interests, the casual acceptance, was everything she’d dreamed of, and barely dared to hope for, when she’d first thought to bring Arthur to New Texacali. And, even now, all these months later, after they’d all settled into their new life and their new routine; after they’d re-established themselves as a family; long past the point where she should have become inured to it, the sight still had the power to bring tears to her eyes.

Although, if she were honest, they were not always tears of joy.

Because this could have been the life they’d always had—if she and Dario had made different choices earlier in their marriage. If they’d reacted differently to provocation; if they’d been more open and honest with one another; if they’d trusted each other more, then, perhaps, the entire last nine years could have been like this; not just the past nine months.

To read more (when it's finished!) join The Crone's Nest: https://www.facebook.com/groups/TheCronesNest