Shakespeare in the Time of COVID-19


Today is William Shakespeare's birthday. It is also about two months into the Corona crisis miss in my country and, frankly, I'm having difficulty concentrating on writing a blog. I thought about writing about Shakespeare, I thought about writing about Corona. Finally I decided to on the subject that touches both a little bit.
The glory of Shakespeare is that his work has lasted so very long. I don't think in his lifetime he imagined that centuries later his works would still be performed all over the world in different languages in different formats. If not, in my home state of Oregon. There's a festival that runs from roughly March to October every year performing his plays as well as other works. The whole town of Ashland is almost completely devoted to the festival and to Shakespeare. You can go into any restaurant and the waitstaff will have an opinion on the current plays and on the actors in them for that season. In Shakespeare's time there were occasions when the theaters had to be shut down because of plague. The people in that time didn't have all the access to entertainment that we have now.
We’re lucky. We have our books. Most of the people in his time were illiterate. We have audiobooks, we have movies streaming on I don't even how many services. But if living through this time doesn't teach us anything else, it teaches us the value of the arts, of storytelling. I've had people reach out to me and tell me that my books are among some of things that help them get through another day of staying at home. For myself, I look to other authors to help me find an escape from the worries of today. And oh yes, by the way, you can stream many Shakespeare plays for free, including the David Tennant version of Richard the second.
And a friend of mine realized that the lines Lady Macbeth’s sleepwalking scene can be used to time the CDC-recommended handwashing method. 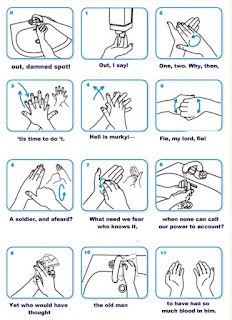 Stay safe out there, friends.