I can’t begin to tell you how excited I was back in July to see Storm Crossed named as one of the 3 finalists for the PRISM award in Urban Fantasy! But it was nothing compared to the feelings that overwhelmed me on September 30th when I found out that my story had actually WON!

I'm still a little dazed, but truly thankful. Much appreciation goes to the organizers and judges of the PRISM - it's a lot of work to put on a writing competition. Most of all, I'm grateful to my wonderful readers who have taken this story to their hearts.

Heir to a noble fae house, Trahern is forced to watch helplessly as his twin brother is cruelly changed into a grim—a death dog—as punishment for falling in love with the wrong person. Trahern doesn’t believe love exists, but he will do anything to keep his brother alive—even join the Wild Hunt and ride the night skies of the human world.

Lissy Santiago-Callahan believes in love but has no time for it. She’s busy juggling her career as an academic and her home life as a single mom to a young son with Asperger’s. Her hectic life in sleepy Eastern Washington is made even more chaotic with the sudden arrival of a demanding fae and his unusual “dog.”

Mortal and immortal have nothing in common, and the attraction between Lissy and Trahern surprises them both. But when their desire places Lissy and her child in the path of a deadly faery feud, will the connection last, or will their separate worlds prove too great a divide?

The ear-piercing screams would have done a pterodactyl proud as nine-year-old Fox entered total meltdown mode in the produce department of Naturally Yours Organics. As usual, the din won either disapproving glares or pained expressions of sympathy from other shoppers. Today the glares were in the majority. In a last-ditch effort to defuse the situation, Lissy sat down on the hardwood floor next to her son’s flailing body. “Just breathe, bud. Breathe in and out.” She kept her voice calm and matter-of-fact, even as she slid his beloved Squishy Bear close to him. Sometimes the soft toy was a life preserver in a storm of stimulation that he couldn’t process fast enough.

“It’s okay, we’re going now.” She got to her feet and hefted Fox, all fifty-one struggling pounds of him, onto her hip. He was small for his age—what on earth would she do when he got bigger? Either rent a hand truck or get a hip replacement. Especially when he continued to thrash like a netted tuna all the way to the front of the store. Once she’d taken a few steps outside, however, he went completely limp, his shrill screams subsiding into strange, silent sobbing, punctuated only by the occasional hiccup. Lissy remembered plenty of occasions those first few years when she’d sobbed all the way to the car, too.

She settled his rag-doll body into his booster seat, placed his bear and his favorite video game within reach, then half sat, half collapsed into the driver’s seat. The closing of the car door shut the world out with a satisfying clunch, and Lissy imagined a baseball umpire yelling, Safe!

Taking a couple of deep breaths in the blissful quiet, she turned the key and switched on the air-conditioning. The car was parked in the shade, but temperatures climbed early at this time of year. Besides, cool air often relaxed Fox, no matter what time of year it was. She checked on her son in the rearview mirror. He lay unmoving, his blond head turned away from the window, face pale and his ever-serious blue eyes staring. He looked exhausted. Although he lost control much less often now, an episode still took a toll on him.

Truth be told, it took a helluva toll on her, too. But Melissa Santiago-Callahan would never give up. The word quit just wasn’t in her vocabulary. Sometimes, though, she couldn’t help but wish that things were different—

She had been close to finishing her doctorate in geophysics when she met Chief Warrant Officer Matt Lovell, on leave from Fort Carson.

Funny, thoughtful, intelligent, and every bit as driven to succeed as she was, the tall helicopter pilot fell hard for her—and she for him. On the six-month anniversary of their first date, they were engaged. Two months after she said yes, he was deployed to Iraq. And one month later he was gone. Death came for him not in the skies that he loved so much but on the ground in an IED explosion.

The shock to her heart was enormous. To go from such a high-intensity relationship to nothing in the space of a heartbeat was hard enough. But even as she swung between soul-searing pain and frozen numbness, Lissy discovered she was pregnant.
And seven months later, Fox was born by emergency C-section.

Despite his abrupt introduction to the world, her son was healthy and strong. Lissy was determined to be the very best parent possible, and if the universe was fair, it should have worked. She should have been able to shower Fox with love and have everything turn out fine.

But by the time his third birthday rolled around, she realized that her beautiful son was different from other children—


STORM CROSSED by Dani Harper is available on Amazon in these formats - Kindle ebook, paperback, Audiobook and MP3-CD.
https://www.amazon.com/Storm-Crossed-Grim-Book-4-ebook/dp/B073TTTGZD 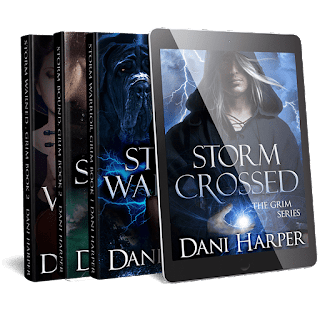 Check out all Dani Harper's novels or sign up for her newsletter at www.daniharper.com