Posted by: Cindy Spencer Pape
Sometimes a character gets into your head and won't let go. Greg Novak was like that. About five or six years ago, I started writing a book called Motor City Fae. In it, my smooth-talking elven bard had a friend--a rough and tumble werewolf who owned a bar, played the drums, and wore a tie-dyed T-shirt and cut offs to a Grosse Pointe house party. He was also a devoted womanizer, managing to make time with the icy Fae secretary Fianna Meadows. He was also a true friend, risking his life for our hero and heroine.

I couldn't wait to write Greg's story. I wasn't sure who his heroine was, but I knew it had to be someone special. I wrote one pivotal scene where Greg is locked in a basement storeroom with his heroine, and is trying to be noble--which he thinks he isn't but of course, he is. The problem was, I didn't finish Motor City Fae for some time--other stories intruded, as did personal things. Once I did, it became clear that Greg's story would have to wait. Greg has a major moment at the end of book 1, but would have to take third place, as Aidan and Elise's story had to come next. I had, however, found Greg's heroine. The ice-bitch Fianna was human now, sentenced to work in a menial capacity. Of course that means she's working in Greg's bar.

When I finally got to Greg's own story, I learned more about him as I went. He's an alpha, and suffered some abuse at the hands of his uber-dominant grandfather. He's loyal. He's tough. And he doesn't take crap--from anybody. Greg lived up to my hopes for him and became one of my all-time favorite heroes. Fianna kind of surprised me. Even I didn't like her in book 1. By Motor City Wolf, though, I think she's evolved enough to be worthy of Greg. What do you think?

Motor City Wolf is available now at Carina Press: http://bit.ly/nv0Tlm  and on audiobook at Audible.com.

Romantic Times called it "charming and original," LASR said it "delights and astounds," and Miz and Crew Love Books called it "another fabulous book in the Urban Arcana series." 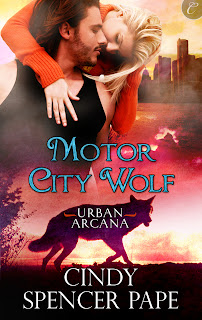 Less than a year ago, Fianna Meadows was a pampered noble in the Faerie court. Then she was exiled, turned mortal and forced to work for a living—in a werewolf bar in Detroit, no less! Still, Fianna has to admit her new life isn't so bad...particularly when it comes to Greg Novak, the bar's sexy owner.

For Greg, keeping his hands off Fianna has been a challenge. But his sense of honor won't let him get involved with a woman put in his care, even if Fianna is eager to explore her new feelings of lust. Resisting the temptation to claim her gets even harder when Greg's grandfather, the region's Alpha, orders him to marry and Fianna agrees to pretend to be his chosen mate.

Fighting his attraction to Fianna isn't Greg's only problem. Someone is killing werewolves and attacking other paranormal beings in Detroit. He vows to do whatever it takes protect both his pack and Fianna—even if that means giving her up...

With a loud, metallic clang, the door at the top of the steps slammed shut.

“What the fuck?” Greg ran up the stairs two at a time. “Not funny, assholes.” He pounded on the steel door with his fist. “Let us out.”

Fianna dropped the box of garbage bags and clutched the pole of a shelf. “What’s going on?” She was only faintly claustrophobic, she reminded herself. And surely, Greg would have them out in no time.

“I swear, if this is Vince or Lana playing a prank, I’m going to rip their tails off with my teeth,” he snarled, throwing his shoulder into the door to no effect.

“Why would they do that?” It didn’t make any sense at all.

“To throw us together, princess.” His voice softened at the nickname, which he’d originally used in such a derogatory tone when she’d first come to work for him. “I believe my brother and cousin think we ought to be a couple.”

“Really? Lana hasn’t said anything of the sort to me.” Although the other woman had been urging Fianna to wear tighter jeans and lower necklines, and she had gone out early tonight, leaving Greg and Fianna alone. “Can’t we phone someone for help?” She pulled her cell phone from her pocket.

Greg shook his head. “No signal. We’re too far underground. Sorry, Fee, I think we’re stuck here for the duration.”

Sweat had broken out on Fee’s forehead, and it was all Greg could do not to run over and take her into his arms. He knew she had claustrophobia issues. The rat-bastard cousin she’d grown up with had occasionally trapped her in their castle’s dungeons as a child, to fuel his own sense of superiority. Greg had found out about it last year, after he’d been a party to putting Fee in a holding cell at the Faerie Court. He’d sworn not to let anyone lock her up again. She was holding up well, but her faint trembling let him know she was anxious.

Greg swore and ran back up the stairs. This couldn’t be happening. He didn’t want to frighten Fee any further, but he was pretty sure this wasn’t a prank. It would be all too easy for whoever had tossed those Molotov cocktails to be watching the place, and to have taken this opportunity to do more damage. Greg and Fee might be in danger themselves if the building burned down around them, but more likely, locking them up meant someone could trash the rest of the place unimpeded.

He pressed his ear to the door and listened to the sounds of metal on metal, as someone systematically tossed the kitchen. A siren sounded in the distance, and the intruders, thankfully, swore and fled, the back door of the club slamming behind them. Unfortunately the siren kept going, passing in front of the club instead of stopping. Damn.

Greg sank down to the top of the step. “They’re gone. I’m hoping they only smashed up the kitchen.”

“Worse yet, we’re still stuck down here.” Even from the top of the stairs he could pick up her scent, and the knowledge that they were together, and trapped, made him want to howl.

“I don’t see why you’re so upset.” She sighed, examining her ragged fingernails which had once been so perfect. He was proud of how hard she’d worked today, of how far she’d come in a few short months. Right now, she lounged idly, presenting a façade of utter boredom, but she wasn’t fooling him. The fear in her scent gave her away. “Surely someone will be along in the morning to let us out. We’ve water, plenty of food, even lavatory facilities. We’ll be fine.”

“It’s a full moon, remember?” His voice was guttural, more growl than speech. He slunk back down the stairs to sit on a keg along the wall farthest from Fee. The rising moon was exerting a pull nearly as strong as the lust he was fighting. The warring impulses practically tore his body and soul apart, but he wanted her so badly, he doubted he could force himself to turn. His body wanted to be in human form to take her. Realizing he was crushing the steel shelving, he loosened his grip, consciously forcing his hands to relax. He couldn’t even look at her, but he could feel her soften, hear her tennis shoes padding on the concrete floor as she stepped up behind him and laid her hand on his shoulder.

“Greg, what’s wrong?” Confusion and possibly hurt mingled in her scent, pushing away the fear. “If you need to change, I won’t mind. Believe me. I’ve become very familiar with the concept of a body that’s out of one’s control.”

“How long have you been human, Fee?” Maybe conversation would distract him from the pull of the moon, and the pain of his erection. Maybe, but not bloody likely.

“Three and a half months.” He could almost see her head droop, her shoulders sag. “It’s been—very strange.”

The distinct tang of arousal had slowly been seeping into her scent as her nervousness abated. “I’ve been feeling things…things I’ve never felt in almost a hundred years as an elf. Things I’m not really sure I understand.” She shifted her legs, squeezing them together.

Her hand on his shoulder burned like a silver bullet. He couldn’t help it; he turned and took her into his arms. He wasn’t even sure who kissed whom, it simply happened. One minute they were standing there and the next minute they were on the freshly mopped, wooden floor with their mouths fused together and his hands clamped onto her sleek little ass.

Her kiss was hotter and headier than anything he’d ever felt. Hotter than his first time with a woman, headier than running beneath the moon on a clear winter night. Her hands were up under his shirt, stroking the skin of his back, while her long, long legs twined around his. It took every bit of self-control he could muster to pull his lips off hers, but he managed, levering up off her body to roll to the side.

“That’s why I need to get us out.” He panted, throwing one arm across his face to block the glare of the industrial overhead lights.

He heard her move, could sense she was sitting up, gazing down at him. “But why is that a problem? Neither of us has a mate, we are both obviously consenting adults. I’d like to explore this. Sex never…appealed to me much as an elf. Now, when I’m near you, my body becomes overheated, sensitive, even swollen in spots. It’s as though I’ll go mad if I don’t touch you.”

Gods, she was trying to kill him. Any second now, the front of his jeans was simply going to burst. He rolled over, face down on the cold wooden floor, and took a deep breath. Crossing his arms to prop up his chin, he looked at her, read the confusion and hurt at his seeming rejection. Her lips were puffy from his kiss, and her long hair was tousled, falling in a ragged ponytail over one shoulder. She’d never looked sexier.