The Magic of Switching Gears

Posted by: Seleste deLaney/Julie Particka
No, I'm not talking about driving. Anyone's who's paid much attention to my backlist knows that I've done some bouncing around the speculative fiction world. I like to do that. It helps keep my brain fresh so I don't get bored in any one world.

But you see...I also like other people's worlds. I'm a bit of what is politely (or not so politely) termed "a geek." So when a call went out last year for novellas for a "geek collection," my heart grew ten sizes that day. (I know it isn't Christmas, but it was the reference I had handy.) I wanted to do it. Wanted to do it badly, but...all my ideas were "real world." I mean, I'd sort of made the jump to contemporary once, but did I really want to do it again?

I debated for a long time, but the answer kept coming back a resounding "YES!" So I eventually listened. Gaming for Keeps got picked up last summer and I'm beyond excited about its release into the wilds of the internet.

A funny thing happened on the way to contemporary though. I kind of found this subtle little mishmash of genres. It's mostly contemporary with a little romantic suspense and a little twist of something quirky (not quite sci-fi, but... let's just say my editor refers to it as "The Big Bang Theory meets The X-Files" with more romance.) I love this book with all my geeky little heart, and the odd part is...it did eventually lead to me writing some straight contemporary (coming soon to an e-tailer near you!)

So yeah. I'll be getting back to the world of the Badlands soon (and Blood Kissed shortly after), but right now I'm hanging out in something a little closer to reality. It's a little odd to be here, but I kind of like it. I hope you will too. 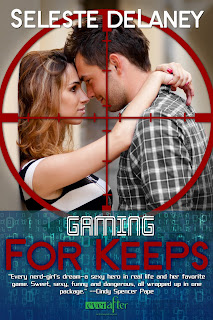 Pen Holloway’s done with men—in real life. Guys in game are so much less drama. But when her partner from Heroes of Fallen Gods invites her to the convention of the year, she panics. What if he’s another jerk? What if he’s not?

Cal Burrows is living his dream of being a spy. One of TRAIT’s misfit spies, but still a spy. It’s the perfect job… until an arms dealer with a taste for blood invades his not-so-secret geek haven. All Cal wanted from ConDamned was to meet his on-line girl. Now, with the threat of mass murder looming, he’s forced to choose between keeping his mission a secret and protecting the girl of his dreams

Despite their attraction, Pen can’t help but suspect Cal’s hiding something. She also can’t shake the feeling he’s not as much of a stranger as he seems.

Buy Gaming for Keeps at: