Posted by: Steve Vera
Somebody once told me that writing fantasy was the hardest of all genres to write. Back in the days before I knew any better, I casually dismissed such babbling nonsense and planned on writing the greatest fantasy epic in the history of the universe.

I mean, how hard could it be? I was a freaking Dungeon Master for crying out loud; creating worlds was as natural to me as a cat slurping tuna juice from the bottom of a can. It's what I lived for. I'd spend months making a campaign--going to the library to research medieval villages and geography, pouring over blueprints of ancient cities, I'd even create personalities for the blacksmiths and tavern owners and mercenaries who would be inhabiting my world, even if my players never even brushed shoulders with them (which did aggravate me, I'll be honest). Bottom line: I was born to write fantasy. Fuggedaboutit is what I said.

Oh, the naivety of the unwritten.

The first strike against me was starting at the mature age of twenty-one, working as a bartender in West Hollywood, CA. I had the same dilemma every night: Go home and write like a good boy, or...go out for a bit of debauchery. I'll buy you a cup of coffee if you can guess which one I chose...hence, the fourteen years to complete my first book. True story. Fortunately, I have a learning computer (my best Arnold impersonation) and it only took me ten months to write the second, but the fact remained that writing fantasy was waaaay more difficult than I thought it would be, and writing a sub-genre even more so. I write urban fantasy by the way. I didn't actually know that when I was writing Drynn, but that's what I'm told.

Be that as it may, in a nutshell, here's why fantasy, and all of its derivatives (which are plentiful), is so hard to write successfully.

First, you have to have all the usual suspects--larger than life characters, a kick-ass plot, pacing and rhythm, proper structure--and all the other nuggets necessary to the craft of novel-dom. And THEN, you create your world that not only must be appealing--organic and fresh--but also allows the reader to suspend their belief in reality. It's like how a figure-skater makes all those twirls and spins look effortless. It's an illusion. Any practitioner of the arts knows that that's the trick; making something really hard look easy. I'm so glad I didn't know any of this before I embarked on my epic journey. I'd like to think it wouldn't have made a difference.

Words are inadequate to properly convey the journey from idea fragment to published novel, it's something only someone else who's done the same can feel, but lemme tell you, there's nothing like typing the words "the end" at the end of a manuscript. Except maybe for winning the Lotto Jackpot. I digress. The point is, fantasy authors are a special breed of writer, even within literary circles. So the next fantasy writer you see..hug them! 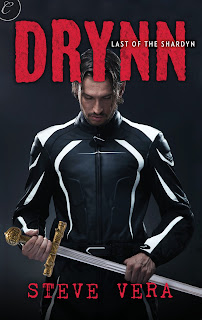 A quick premise of the first book Drynn of my trilogy:

The heroes of two worlds, Earth and Earth's magical twin Theia, reluctantly join forces to fight the Lord of the Underworld.

"A deep gripping story that tickles the reader with This. Just. Might. Someday. Happen..."--Linnea Sinclair, author of the Dock Five Universe series.

So the next time you have a hankering for a tuna salad...