By Hook or by Crook -- Writing Beginnings

Whenever I can’t decide what to read next from my towering To-Be-Read pile, I hold a first sentence contest.  I read the opening paragraph of each book and whichever one hooks me the most wins.  Sometimes I don’t even make it through the entire pile before getting caught by a skillful author.  A good opening can make me laugh, raise my eyebrows or shiver in anticipation.


Here are some of my favourites: 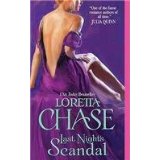 London, 5 October 1822.
My Lord, You must Burn this Letter after reading it.  Should it fall into the Wrong Hands, I shall be once again Exiled to the COUNTRY, where I shall most certainly be placed in ISOLATION.
Last Night’s Scandal by Loretta Chase.

If the other novice wizards on the row hadn’t broken into Raeshaldis’s rooms the previous day, pissed on her bed and written WHORE and THIEF on her walls, she probably would have been killed on the night of the full moon.
Sisters of the Raven by Barbara Hambly.
I was never particularly keen on my job before I got shot and nearly lost it, along with my life.
Odds Against by Dick Francis.

As a reader, I love hooks, but as a writer, they drive me crazy.
Most of my novel receives 3-5 drafts, but those opening pages are so important and have to do so many things--hook the reader, show the setting, introduce the main character in a sympathetic way, set the tone and voice for the rest of the novel—that I often do 5-10 drafts of them.
My first draft opening for Gate to Kandrith is lost in the mists of time—I used to simply save overtop of the first draft when I did the next one—a practice that now makes me wince--but here is the second draft beginning:
On the morning of my exile I awoke with a vile taste in my mouth and a headache.
This opening has a few things going for it, mostly in that it raises questions.  Why is she going to be exiled and from where?  Why does she have a headache?
Unfortunately, during the revision process I realized I’d started the novel too early.  Most of the book deals with Sara’s ‘exile’ to Kandrith, but I needed some space to show the reader the corrupt and decadent Republic of Temboria and introduce some very important characters (like the villain!) so that they didn’t come out of nowhere in the ending chapters.
Sara still wakes this way with a vile headache, but the scene now takes place at the beginning of chapter three.

3rd draft:
Sara stared down at the peppered songbirds’ tongues curled on her plate with revulsion.  Tonight should have been a triumph for House Remillus, but she longed for the feast to be over.

She turned her head to the side, but the sick feeling in her stomach didn’t subside.  The banquet hall’s white dome pressed down on her as if she were an insect trapped under a bowl—with two thousand other ants.  The rise and fall of hundreds of conversations battered her ears with a sea of sound.  The thick, sweetish smell of burning incense sticks warred with the odor of sweat.  That and the stifling hot room combined to make Sara feel muzzy-headed.

In addition from switching from first person to third person POV, this new opening achieves some of my goals: it shows the decadent setting and hopefully provokes some sympathy for Sara.  Everyone has had the experience of being sick to their stomach and bird tongues to eat?  Blech.
I played endlessly with this opening, polishing the sentences, changing their order, etc. ad nauseum, (pity my poor writer’s group) but was still unhappy.  Eventually, I decided I needed a better hook.  I’d been trying so hard to establish my character and setting, that the first actual bit of action had drifted all the way down to page three!
7th draft:
Sara's stomach compressed into a hard knot as the tall, cadaverous high priest of Nir, the God of War, strode into the banquet hall.

Seeking reassurance, Sara touched the crossbow she'd secretly had mounted to the underside of the head table.  The other high priests had come to confer a blessing on her father, the new Primus, but she doubted Nir's motives were so benign.


I didn’t delete the description of the hall and the bird tongues.  It’s still there in the first scene, it just comes a little later.
The introduction of Nir and the crossbow punches up the conflict nicely.  This is the version I submitted and was accepted, but my editor Stacy Boyd asked for one more tweak.
Final version:
Almost time.

Sara’s stomach compressed into a hard knot as the tall, cadaverous high priest of Nir, the God of War, strode into the banquet hall.

Seeking reassurance, Sara touched the crossbow she’d secretly had mounted to the underside of the head table.  Hidden by the tablecloth, her fingers found the crossbow bolt she’d loaded, the cord she’d cranked back still taut, ready to fire as soon as she gave a hard pull on the lever.

If you’re a writer, do beginnings drive you crazy, too?  As a reader, what are some of your favourite first lines?