Why Do People Kiss Under the Mistletoe?

At this time of the year, many homes hang a sprig of mistletoe under a doorway. According to custom, a man is allowed to kiss a girl if she is caught standing under it.

From my research this seems to be an ancient tradition beginning with the Norse. Legend has it that Balder, son of Frigga, was killed by an arrow made of mistletoe shot by Loki. So distraught by the loss of her son, she wept tears of white berries which brought him back to life. Frigga then blessed the plant and vowed to kiss all those who pass beneath it.

It has always been believed that mistletoe will increase life and fertility.

The Druids considered it a mystical plant since it won't root in soil but into other trees, mostly the oak. They would hang sprigs over their doorways, believing it would bring happiness and protection to the household.

In ancient Rome, it was custom for the visitor to kiss the hand of the host signifying their good faith. Since mistletoe brought happiness, kissing them under it was a pledge of eternal friendship.

When the Romans conquered Britain and France, they brought their traditions and adopted a few of the Celtic ones. With the spread of the Christian faith across Europe, new beliefs were mixed with old customs giving birth to what we do today.

I also read that when a man kisses you under the mistletoe he's supposed to pluck a berry from it. Once all the berries are gone there's no more kissing.

The lesson to this blog is make sure to find a sprig with many berries.


Be sure to join in The Mistletoe Bloghop on Dec. 14th. 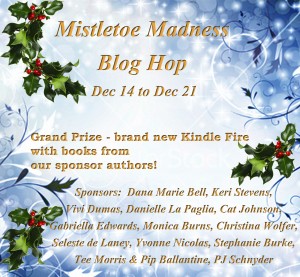 Men don't swoon at her feet, they fall at them dead.
Hunting Colby, book 2.5 of The Angler series, releasing this month!!
Annie Nicholas   www.annienicholas.com ﻿