Building a House of Cards 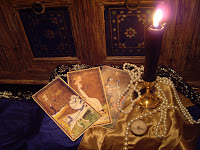 Yesterday on my blog, I talked about worldbuilding for my series-in-progress. Like certain characters, elements in a fantasy world have a tendency to come out of nowhere and demand to be written. Sometimes the genesis of the idea is obvious, but the rest of it, the "why this?" is anybody's guess.

The idea for the demon hero in my world began to form while I was watching an episode of Firefly called "The Message," about a thief who got in over his head on a risky deal. Next thing I knew, I had an unknown person in my own head who was part Malcolm Reynolds and part Tracey (the overreaching thief), and he was playing poker in a smoky den with an angel.

Like the other players in that celestial den of iniquity, I never stood a chance against Belphagor. He soon had me researching Russian prison tattoos, train schedules on the Trans-Siberian Railway (they're complicated—and everything is listed in Moscow time, despite the fact that the route extends across ten time zones), and poker.

I figured it would be hard to find poker decks in Heaven (and I didn't want to give away my own ignorance about the game), so I found myself designing a card and dice game to go along with my demon. As things progressed, this impossible game turned into a divination deck as well—one that was capable of sending messages from the celestial plane to email accounts in obscure Internet cafes in Russia to be read by a computer-geek gypsy named Love. 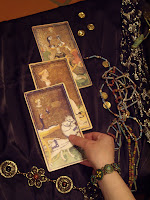 Right around the same time the divination deck developed, I got stuck in a plot hole. The Russian Tarot of St. Petersburg was lying on top of my research books after I'd been looking up card equivalents to assign meanings to those in my divination deck. I thought, hell, the tarot's as good as anything to figure out this mess, so I threw down a spread. Strangely, it made perfect sense. Which, is, I suppose, how the tarot really works: we assign meaning to the archetypal images and make associations with things already in our subconscious.

This was the first time I'd used the tarot for plotting, but I've been consulting the tarot to help myself think through problems for most of my adult life. It never quite works as well for me, though, as it does when I read for others; I've been told that my readings are spot on. It's the way of such things, since it's difficult to be objective about your own future. But since a character is an "other," it seems to work well.

The tarot spread I use is a modified "Celtic cross," similar to the one below, with one additional card in the center. 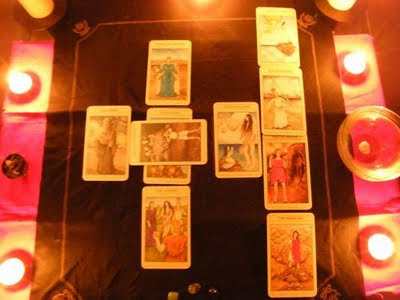 The initial card, or the "querent," stands in for the character whose course I need to plot. Then I use a covering card and a crossing card, representing the element having an immediate impact on my character, and any outside influence that may be there to help or hinder (this third card crossing the first two isn't shown in the image above). Surrounding those cards, "the heart of the matter," are the overarching and underlying issues, and events of the immediate past and future.

It was surprising how much the character was able to tell me about herself from that familiar structure. Once I figured out the "heart" of her "matter," I read the final four card positions: Self, Home, Hopes and Fears, and the Outcome. My character was literally heading home, but didn't know what she was going to find there. To her (and my) surprise, the tarot told her that her man had a heart of gold and he would sacrifice everything to be there with her so they could face the outcome together.

I was so pleased with the reading, I had another character in the story who was using the cards to send a message give my character this reading instead. It was an unexpected bonding moment between characters who previously hadn't liked each other that would carry over into later books. 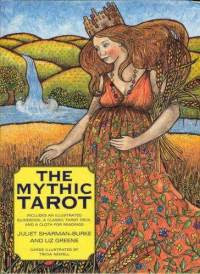 Care to try it yourself? The deck shown in the Celtic cross layout above, "The Mythic Tarot," is a great one for the beginning tarot reader, and perfectly suited to plotting, since it's based on the familiar archetypes of Greek mythology and the hero's journey. It comes with a detailed book that gives a history of the card along with the divinatory meaning.

So tell me, have you ever used "magical" assistance to get your characters out of a jam?