The Twisted Tale of Stormy Gale! 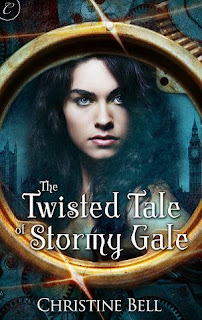 Today I'm doing a giveaway! Comment between now and midnight EST Tuesday and one person will win a copy of my steampunk romance novella The Twisted Tale of Stormy Gale! And don't forget, everyone who comments this week is also entered into our grand prize drawing for the steampunk prize pack (pictured to the right and also in more detail in yesterday's post here!)
Just leave a comment with your email address so we can reach you, and you're entered to win! We will be picking our winner on Saturday!

Now, for a little about Stormy...

As a young girl in 19th century London, Stormy spent her time on the streets. Discarded by her family, she and the other Fenchurch Street urchins struggled every day just to get enough to eat. Then, Professor Gilly Green blew into town and swept Stormy and her brother Bacon away on a journey through time, to the 20th century where he raised them as his own.

Sixteen years later, she is grown and has embraced a life of adventure. She’s a time pirate, a modern day Robin Hood hell-bent on righting the wrongs in the world. When she embarks on yet another escapade through time, things don’t go according to plan. She finds herself in 1836 New England running an ill-conceived con on a madman in order to get back what is rightfully hers. Her adventure lands her in hot water as she winds up shackled to a bed in The Loony Duke of Leister’s torture chambers. Little does she know that the Loony Duke is someone from her past, who is going to turn her life upside down.

Want to read the first chapter? You can check it out here.

Stop back by each day this week for a chance to win and to read a little more about the other fabulous Steampunk Week releases!