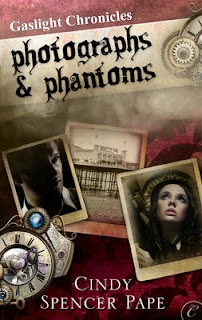 When Carina Press asked me to write a novella to be given away free during steampunk week, I was thrilled and enormously honored. I knew it had to tie into my Order of the Round Table from Steam & Sorcery, but I didn't want to skip all the way ahead to when Merrick and Caroline's children are grown. So I decided to bridge the gap with family friend Kendall, Marquess Lake. He's not in book 1, but his grandparents are, and so is Lord Drood, the great-uncle of our heroine, Amy. On the web, I've seen a couple reviewers call it "Gaslight Chronicles book 1.5." That's probably pretty accurate. I do promise, though, you'll get to see glimpses of Caroline, Merrick, and the whole Hadrian clan as well as meet some new characters.

Something else I want to mention. My Gaslight stories are romantic, which seems to have come as a surprise to one or two readers, though I'd thought the blurbs and covers made that pretty clear. They may have SF or Mystery listed as their primary genre, but the romance is at the core of the story. So here's a little something steamy from Photographs & Phantoms:


“Kendall, can you tell me? Why did you kiss me? Surely if you were simply in need of a woman, you could find someone to…sate your appetites.”

Now he was the one squirming in his chair. He leaned forward, elbows on his knees, knowing the posture would hide his body’s reaction to this line of discussion. This was the last thing he wanted to talk about, but he supposed she deserved some sort of explanation. “It was a spur-of-the-moment impulse,” he began carefully. “It had nothing to do with me being ‘in need’ and everything to do with you.”

“There’s no need to sugarcoat things, Kendall.” She shook her head. “I know I’m nothing spectacular to look at.”

“You’re not the perfect fashion plate,” he admitted, smiling when her eyes flew open at his bluntness. “A bit more curvy than is strictly the thing, but most men tend to prefer that. And your freckles are enchanting. Surely you know you’re a damned appealing woman?”

“Thank you.” Even in the dim light, he saw her flush and she once again nibbled on her lower lip. “Was it a momentary thing, then? Or do you still find me attractive?”

Kendall groaned. “Far too much for my peace of mind. In fact, we really shouldn’t be having this conversation, especially in your bedroom. I’m trying to remain a gentleman, but it’s difficult when you’re sitting there in your nightclothes.”

“Truly?” Her broad smile nearly lit up the room.

“Truly.” How could she not realize her appeal to the male sex? He was tempted to stand up and let her see the effect she had on him.

She wet her lips with her tongue and his problem grew even larger. “Then, since you’re not attached, and you are attracted…” Her deeply indrawn breath pressed her full, unbound breasts against the fabric of her dressing gown, and Kendall swallowed hard. “I wonder if I can ask you a favor.”

“Go ahead.” His voice came out thick, nearly choked.

“I’m twenty-six and likely to never marry,” she said in a low, husky voice. “I was wondering if, perhaps, you could teach me a thing or two, about…sexual relations.”

* * * *
If you're intrigued by this little snippet, remember, the full novella is available for FREE! Click here to download your copy in e-pub format or here for the Kindle version. If you love it, don't forget to go get your copy of Steam and Sorcery, book 1 in the Gaslight Chronicles.  Meanwhile, stop back by each day this week for more chances to win and to read a little more about the other fabulous Steampunk Week releases!