Bring It Back (List) Never Have I Ever by PG Forte

I'm doing a takeover at The Shop Series Reader Group today in anticipation of my July 21 release of Funnel Of Love. So stop on by if you get the urge! This is the fifth book in my Games We Play series, and it's the story of Rocco DiLuca, whose sister Kristy is the heroine of book 2, Never Have I Ever. 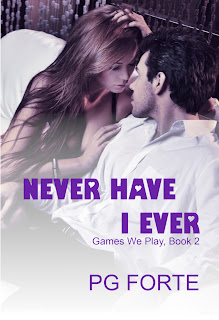 Never Have I Ever
Games We Play 2.0
PG Forte
PNR, BDSM, Holidays (New Years Eve, Mardi Gras)
100 pages
Buy links: https://books2read.com/u/4AOwJK
Kristy loves Luke but if anything was clear to her back when they were kids it was that gawky, awkward, tomboys didn't stand a chance with the king of the schoolyard. She watched her older brothers set their caps for Luke's glamorous cousins and get shot down. So she did what she had to in order to salvage her friendship with Luke. She hid her true feelings and her need for him to take control.
Luke wants Kristy in the worst way -- actually, in all the worst ways: tied up, held down, beaten, bitten, whipped. But he knows he has no chance of ever having her. They'd been childhood friends and sweethearts, until she friend-zoned him in the fifth grade. He knows he can either keep her as a friend, or take her to bed and lose her forever. His biggest mistake—so far—was in hiring her to work alongside him in the bar he and his cousins inherited from their grandmother. He knows Kristy needs the money and the job, but Luke's self-control can't take the constant contact with the girl he wants to dominate–both in and out of the bedroom. Something has to give—and soon!
EXCERPT:
“Hey, DiLuca,” Luke called to Kristy as he helped her close the bar—cleaning tables and stacking chairs. “D’you know what a drunk’s idea of a balanced diet is?”
“Wait, I do. I know this one.” Kristy looked thoughtful as she straightened up from the table she’d been wiping down. “Uh…a drink in each hand? Something like that?”
“Yeah.” Luke frowned. “A beer in each hand, actually. Did I tell you that one already?”
Kristy smirked. “Well, you must have, right? I don’t know anyone else with your encyclopedic knowledge of corny jokes.”
“Oh.” That was a relief. But why was that the case? It shouldn’t have mattered all that much if other people were telling her stupid jokes. It shouldn’t have mattered at all, come to think of it. It wasn’t right that he was so invested in keeping her to himself. But he was just the same.
“So, this memory problem you’re having, is it age-related or due to alcohol consumption?”
“Don’t be a brat,” Luke admonished as the urge to punish her—never far below the surface anyway—rose up to tempt him. He loved her all the more for being bratty, but the whole not being able to do anything about it? That royally sucked. “And cut the crap. You’re only a year younger than I am, and—”
“And I can drink you under the table. Yes, I know.”
Luke shook his head. “You’re really asking for it tonight,” he muttered, wishing she were. Oh, if only she were doing it on purpose. If only she really wanted what she was tempting him to give her. “Keep it up and I’ll go home and leave you to finish closing on your own.”
“Is that supposed to frighten me?”
“Ha-ha.”
It was an empty threat, and they both knew it. One of the main reasons he’d hired her to tend bar was so that they could split the shifts between them and give him a couple of nights off each week. But the sad truth was that, these days at least, he didn’t really have much of a life outside of the bar. So more often than not he’d stop in to check things out even on his days off. He’d tell himself he’d only stay a few minutes, that he’d leave after a drink, maybe two. He never did. Some nights he and Kristy would hit a diner when they were done, sometimes they wouldn’t, but at the very least, he’d always help her close.
It was part of their routine. He’d flirt with her and tell her stupid jokes. She’d laugh at him and call him an idiot. Afterward, he’d go home and fantasize about all the ways he’d like to punish her for being such a brat, all the ways he’d like to have her.
It was pathetic—he knew that. But the upside was that he got to spend time with her nearly every day, to indulge his hopeless passion for the girl, to watch her laugh. He got to take care of her, to make sure no one hit on her inappropriately…or at all, for that matter. Because that’s what friends did. Because that’s what kept them friends, kept her from cutting him out of her life or drifting away.
The downside was his sneaking suspicion that he was keeping them both from moving on with their lives.
* * * * * 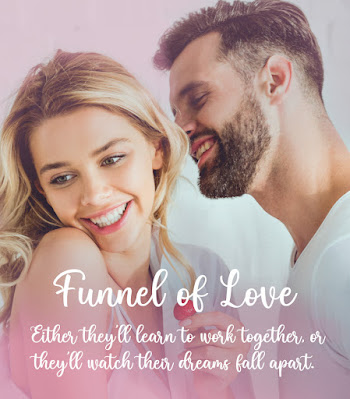 Funnel of Love
A Games We Play Story

https://books2read.com/u/mvoerj
Will Atlas Beach be big enough for both of them?
Baker Rocco DiLuca is not a happy camper. He’s just found out that his baby sister is getting married—to his former best friend—and he's not invited. But that's not even the worst part. They’ve hired someone else to make their wedding cake!
He knew he and Kristy hadn't exactly been speaking to each other, but he hadn't realized they Weren’t Speaking to each other! Now he has to figure out how to repair their family feud, or forever keep his distance. Unfortunately, his best hope for success is the woman he considers his competition.
Stephanie Sands thinks the Chamber of Commerce’s mentorship program is a great idea! She’s not ashamed to admit that her boutique bakery, Sugar Kink, isn't quite making it. Yet. But the mentor she's been assigned, Rocky D, isn’t just traditional, he’s positively medieval. It’s no wonder his sister wants nothing to do with him!
Can they put aside their differences (and the insane attraction they feel) to help each other out? Or will their dreams fall as flat as a failed souffle?
​ Release Date: July 21, 2022

Email ThisBlogThis!Share to TwitterShare to FacebookShare to Pinterest
Labels: Bring It Back(list), Funnel of Love, Games We Play, Never Have I Ever, PG Forte