What If Ladies Ruled the World?

Posted by: Joely Sue Burkhart
That's the question that started it all for me.  Somehow all the things I loved as a reader--Regencies, Jane Austen, SF/F--mixed together in a slow boil, just waiting for the catalyst that would set my new story world into motion.  What was the catalyst?

Mrs. Giggles wrote a post about a Regency drinking game.  I can't find the original post now, but I remember just howling at some of the hilarious "tropes" we often find in Regencies today, like the virgin heroine who martyrs herself to save her brother/family, sleeps with a Duke, and then protests that she can't marry him because he doesn't love her.  The rake shagging anything and everything in Town, who then becomes enamored with the TSTL heroine's innocence.  I just loved the humor mixed with the love for those tropes.  I mean, we must love them as readers because we see them over and over.

It seems like Mrs. Giggles said something in her post about why the heroine had to act like an idiot.  If the HERO did some of these things....

Then it hit me like a ton of bricks.  What if I took those tropes and switched the genders around?  What if young male debutants were expected to be demure and innocent?  While the ladies watched them promenade around Almack's?  What if the women had the social power?

What if ladies ruled the world?

Or in A Jane Austen Space Opera, what if ladies ruled the universe? 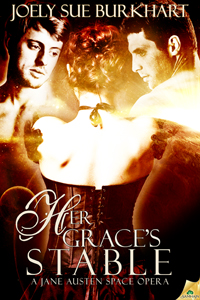 The "Black" or "Demon" Duchess instead of Duke with the misunderstood past.

The war-weary heroine with battle scars that only make her more "dashing."

Of course me being me, I take it all downhill pretty fast and end up in the bedroom.  Or rather, in this case, the stable.  *laughs*

What's your favorite Regency trope you'd like to see twisted around?  One commenter will win a e-copy of Her Grace's Stable!