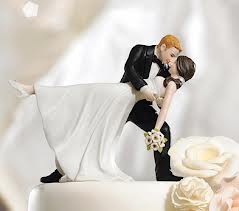 Marriage is one of the great public occasions in a person’s life at which the principals can revel in being the center of attention. For the bride, it is Her Big Day and for centuries women have worked hard to make every detail special, memorable, and perfect especially their wedding dress.
Medieval Brides 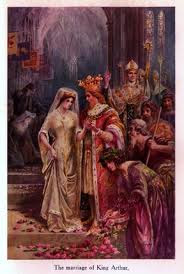 Royal princesses were more ‘royal’ on the wedding days. In the medieval era, when royal weddings were great political events and used to seal alliances, the bride had to look majestic. She had to uphold the prestige of her country, impress the in-laws and their country with her own wealth, and if possible outshine them.
In days when all fabrics were hand spun, woven and dyed, and economical use of fabric was normal, wedding gowns made with more material, dyed with expensive dyes, and expensively accented made the statement the bride’s family was wealthy. Skirts were gathered, sleeves were down to the ground and trains were long. Rich colors were used because these dyes were expensive. Furs and jewels were often used as accents. No expense was spared.
The gowns for lower class brides were also formal. They too tried to impress. Humbler fabrics and dyes were used but brides copied the styles of the nobility and trimmed their dresses with less expensive furs, rabbit or fox.
Peasant brides wore cloth died green or blue. Weddings were still a special occasion for the lower classes as well. They dressed as formally as possible wearing humbler fabrics, but styled on the order of the nobility as much as possible. They used flowers and ribbons to enhance their gowns.
By the 1300’s wedding gowns were the ‘bold coat,’ fitted over gowns worn over the kirtle or under dress. The ‘coat’ was laced up and had long sleeves, and a long slit up the front to show the under dress and train.
Some shade of white has always been a favorite. It symbolized virginity and innocence. But white was not practical and not always worn. Blue, associated with the Virgin Mary, was another symbol of purity as well as fidelity and eternal love was also worn. Brides who wore blue believed their husbands would be true to them. If they didn’t wear blue, they wore something blue, a tradition that we still see today. Other popular colors for bridal gowns were pink, yellow, even brown and grey.
Victorian Brides 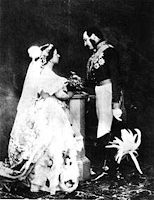 In 1840, Queen Victoria married Prince Albert and wore a relatively plain white satin gown. Her headdress was a wreath of orange blossoms with a lace veil and eighteen foot train. Their official wedding picture was published around the world and the white wedding gown became the fashion of high society.
The Industrial Revolution brought about great changes even in wedding gowns. Materials were more accessible and reasonably priced.  By 1890, the white wedding gown became a tradition.
Edwardian Brides and Onward 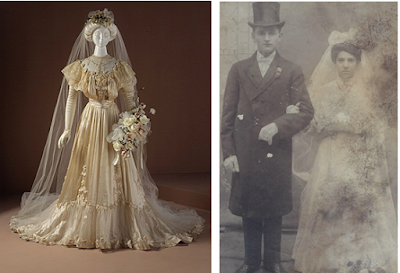 This period brought about more extravagance in wedding gowns with lace and pearl embellishments. Overtime, hemlines rose and tight laces corsets disappeared. Wedding gowns followed the fashion of the day and reflected the economics and politics of the time. During WW1, styles became simpler. Gowns in the 1920’s reflected the flapper style. During the depression, brides wore their ‘best’ dress for their wedding with many brides dying their white wedding dress after the wedding to get more use out of it.
The picture above on the right is special to me, My grandparents, Samuel and Ida Finkelstein on their wedding day March 7, 1908.
Modern Fairy Tale Weddings 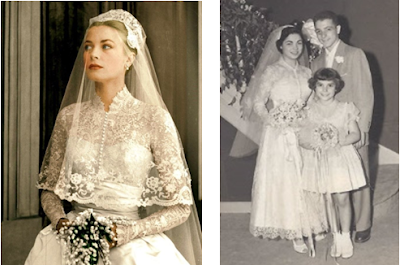 Grace Kelly’s marriage Prince Rainier of Monaco in 1956 set the next big trend. Her wedding gown was a white high-necked, long-sleeved gown with fitted torso and billowing skirt made of twenty-five yards of silk taffeta, one hundred yards of silk net, peau de soie, tulle and Brussels rose point lace. She wore a Juliet cap decorated with seed pearls, orange blossoms, and a veil of 90 yards of tulle. Like Queen Victoria's wedding before her, Princess Grace's wedding set the trend for the next decade and big white wedding dresses were in.
This picture above on the right is my sister, the bride, my brother and me. You can see a similarity in the wedding gown style. Her wedding was in 1953, a bit before Princess Grace’s. I like to think my sister set the trend. 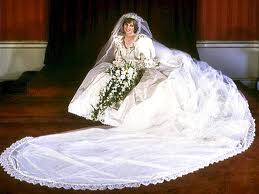 Lady Diana’s wedding to Prince Charles in 1982 was also a spectacular wedding complete with a Victorian styled dress. It was puff-sleeves with a fitted bodice, full skirt ivory taffeta on a grand scale. Diana’s gown was not understated, it was grand. It was grand. The nineties saw a return to sleeker, less complicated styles. 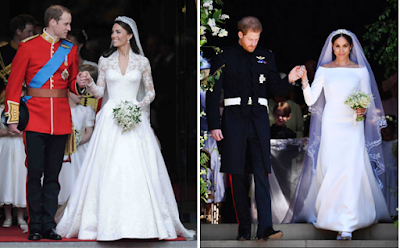 Fairy Tale weddings continue to draw our attention and play to our dreams. Who doesn’t see Prince Charming with his Cinderella in these pictures?
Today, brides dress in any style from ornate designer dresses to informal dresses and suites. While the traditional colors remains white, eggshell, ecru, and ivory colored wedding gowns are coming back in style.
Our Fairy Tale Wedding
Last month, our future daughter-in-law asked me to go wedding gown shopping. I joined her sister and her aunt at the bridal shop. It’s very different being the mother of the groom especially after working with both my daughters on their weddings. But some things are the same.
My eyes teared with each gown she put on. One was prettier than the next. I’ve only known her for five years, but I’ve seen her grow and blossom as a young woman and as my son’s partner.
When she walked out of the dressing room in front of me stood a poised beautiful princess in a white  lace gown. Seed pearls and crystals embellished the bodice and skirt all the down to the gorgeous lace trimmed train. I’d love to tell you more, but I’ve been sworn to secrecy. You'll have to wait until September 1, 2019 (9-1-19, my son loves the palindrome) to see how lovely she looks.