Many years ago, I attended a panel at World Con on world-building and heard Carol Berg (whose fantasy novels I highly recommend) talk about designing one’s fantasy world to test and shape the main character. I thought it was a brilliant approach. Prior to that, I’d always treated character and world-building as two entirely separate things, but in truth they intertwine. 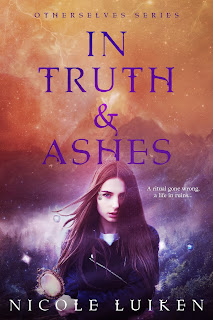 When I started writing In Truth & Ashes, book three of my Otherselves series, I knew three things. First, the True World was science fantasy—a world which used magic to do highly technological things. Second, that Belinda’s first scene was of a magic betrothal going horribly wrong, and, third, that her best friend/love interest was a demi-god.

Why science fantasy? In books one and two, I established that the True World lies at a magical crossroads for the Mirror Worlds. The True World has cherry-picked the best of all four worlds for itself. In particular it has stolen a lot of technology from Water World (our earth)—with one big exception. The ecological collapse of Stone World made the True Worlders decide to shun the internal combustion engine. Instead they power their world by using geothermal and tidal energy to infuse power gems, which then act as batteries.

One of the very important pieces of magic-tech is a neural implant called a genie that Belinda uses like a sophisticated smartphone. She depends on it and is distressed when she can’t access it. Her friend Demian (yes, the demi-god mentioned above) doesn’t have a genie and this technological handicap means that he relies more on his personal magic. This is where world influenced character.

Where character had a big effect on the True World was when I was designing its system of government. Since I wanted Belinda to be torn between love and duty to her family and to her world, I needed an atmosphere of privilege and noblesse oblige. Instead of a modern democracy, the True World has something more similar to the way Britain’s House of Lords and House of Commons operated in the 1800s, with one governing body elected by the people and the other a birth-given right of the nobility. Belinda’s grandmother is the First Councillor (i.e. prime minister) and she has raised Belinda on tales of how her father’s marriage to her commoner mother was a political disaster. Belinda believes she must marry well to secure her family’s power. Breaking free of this massive guilt trip, while still keeping the notion of service to the realm, makes up Belinda’s struggle for most of the book.

So, for me, one influences the other in an organic unplanned way.