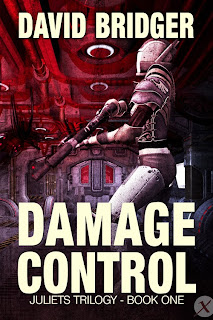 
17-year-old Kath Preston and Jen Stenberg are junior damage control engineers on the generation starship Romeo, 582 years into its 800-year journey from frozen Earth to the planet Nirvana. When they were schoolgirl best friends, Romeo's population was doubled by taking on their fellow survivors from its stricken sister ship Juliet, in the disaster that claimed the life of Kath's heroic father, Peter.

On a quiet Christmas Eve ten years later, when Kath and Jen have the duty, disaster threatens once again. The lurking ghost of the Juliet and a murderous rogue crewman stalking Romeo's decks combine to threaten the ship's safety and the lives of those they love.

Can they step into Peter Preston's hero shoes?

A Map of the United States' Mythical Lake Monsters: "This map might send you down the cryptozoology web research rabbit hole, but Atlas Obscura has descriptions and illustrations of some of these fantastical beasts, including the Eel Pig of Herrington Lake and the ape-like Honey Island Swamp Monster."

Discussion about diversity in Speculative Fiction. This post caused a stir. Check the comments section for links to opposing viewpoints.