Posted by: Shona Husk
I'm a plotter, but quite often my brain will throw in some random one liners which at the time don't mean much but end up becoming very important. One of those throw away lines in Cursed (book 1) was that Petyon had been bitten by a hell hound.

I knew the heroine of Embodied was going to be hijacked by a goddess, but it wasn't until I was plotting the story in more detail that I realised what a problem the hell hound bite was going to be. It causes him to have a crisis of faith in his goddess and he has to decide if he even wants to be a witch. I may have written a witchy inspirational...

In Embodied I also got to have the fun of turning Peyton, a very respectable lawyer, into a hell hound following his baser instincts and then follow it up with waking up naked in an unexpected place :) 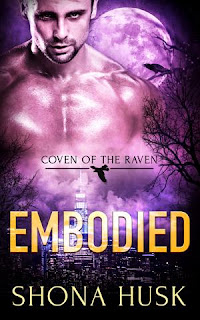 A love potion gone wrong leads to a goddess hijacking Alexis’s body. Now Alexis will do anything to catch her boss's eye. It’s unfortunate that he starts to notice her for all the wrong reasons. Such as the army of cats following her around.

Peyton Kilpatrick has always kept his relationship with Alexis professional despite the simmering interest. But something has changed, she crackles with magic and she wants more from him than he’s able to give. As a witch and a lawyer his life is complicated enough, throw in a hell hound bite that causes all kinds of side effects around the full moon and he really isn’t boyfriend material.

When Alexis finally gets Peyton in bed, things get hairy. Peyton reveals what he is and convinces her to give up her new-found power. If she doesn’t get rid of the goddess inhabiting her body, she’ll die.