The Devil of Bourbon Street by Cindy Spencer Pape, originally released as part of the Here Be Magic anthology, is now available as a solo novella on Kindle and Kindle Unlimited, with a hot new cover by HBM's own Angela Campbell! Also, Cindy has the rights back to nearly half her backlist, so look for another re-release every week or two, along with some new fiction to come out in 2017. 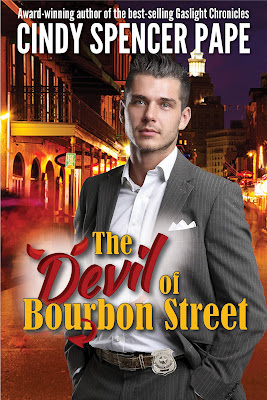 Three years after his wife’s death, Quinn Carling has finally come to peace with himself and the detective returns to New Orleans to visit her grave and say goodbye. Darcy Jefferson is a street performer who can see auras and refuses to let her abusive past bring her down.

When this unlikely pair meets, the sparks begin to fly. When they witness a murder together, Quinn resolves to protect Darcy. With help—and interference—from Quinn’s former in-laws, the local police who want Quinn back, a mutt named Olaf and a powerful voodoo priestess, the two of them help search for the murderer, so he doesn’t find them first. Quinn never expected to fall in love again, but he hadn’t counted on the magic of New Orleans. 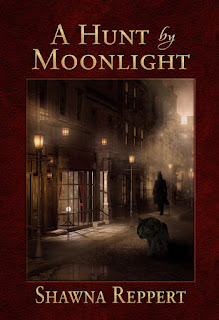 This steampunk Victorian detective novel by an award-winning author has been described as 'Sherlock Holmes with werewolves'.  It currently sits at #2 in Amazon's steampunk for Kindle category and it's free through 1/19/16. Snap up your copy here!

More about the book:

Something more deadly than werewolves is stalking the gaslit streets of London. Inspector Royston Jones, unacknowledged bastard of a high-born family, is determined to track the killer before more young women fall to his knife. But his investigation puts him in the way of a lord who is a clandestine werewolf and the man’s fiancée , a woman alchemist with attitude and a secret of her own.  Will they destroy Royston to protect their covert identities, or will they join with him to hunt the hunter?

Pets In Space, A Library Journal Pick for Best Books of 2016     Sale!
The Pets In space scifi romance anthology is on sale for $.99 for one week only, starting tomorrow!

Join the adventure as nine pet loving sci-fi romance authors take you out of this world and pull you into their action-packed stories filled with suspense, laughter, and romance. The alien pets have an agenda that will capture the hearts of those they touch. Follow along as they work side by side to help stop a genetically-engineered creature from destroying the Earth to finding a lost dragon; life is never the same after their pets decide to get involved. Can the animals win the day or will the stars shine just a little less brightly?