How Big is Your Umbrella? 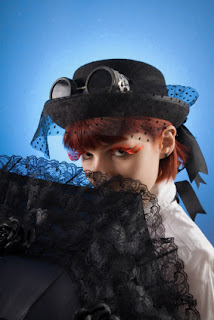 Steampunk is big. And by that I don’t just mean it's popular or hot or trending (or any of the other things we sometimes mean when we use that term). I mean it’s broad, kind of like the umbrella in that picture over there. It's big enough to cover a lot of territory.

Sure, it may have started out as a literary sub-genre of Science Fiction, but it’s a sub-genre with legs! Mechanical legs, I imagine, but that’s entirely beside the point. But it's grown up a little in the last few decades and, by now, I believe a compelling argument could be made that Steampunk is a genre in its own right—with its own offspring of sorts. Author Suzanne Lazear has even compiled an interesting list of some of the many different punk sub-genres that have sprouted from Steampunk’s roots.

But is Steampunk merely a literary genre? Steampunk.com, in their post discussing what—exactly—steampunk is concludes that it’s not. According to them, “steampunk is a genre AND a design aesthetic AND a philosophy.”

It’s a valid conclusion, I think. All that historical re-imagining has a distinct political/philosophical slant to it. And beyond that, there is steampunk art and steampunk jewelry and steampunk music  there are gadgets and gizmos galore…why, yes, that was a tip of the top hat to Disney's Little Mermaid even if it is one of the least steampunky of all their films…well, that and Pochahantas, I guess. Although, come to think of it, Ursula is a very fine representation of a kraken.  Hmm.

There is also steampunk couture, of course. And I might be wrong but I think it’s probably the only literary genre to have sparked its own style of fashion, unless you count the science-fiction inspired fashions of the early 60s  and late 70s, which I’m not sure you can.

Anyway, my point is this: since Steampunk is such a big umbrella, capable of covering so many disparate forms of creativity and thought, so many varied sub-genres of its own, you wouldn’t think it would have such a hard time playing well with other genres.

Of course I’m thinking of Romance here (well, someone has to!). Because while Steampunk Romance might seem like a happy marriage of true minds, so to speak, it generally tends to be more of a Capulet-and-Montague type merger: a perfect fit for those involved with creating it, a good excuse for a knife fight to everyone outside.

It saddens me. Why shouldn’t Romance heroines get to dress in leather corsets? I mean, they already do, in some sub-genres, obviously. Is it that Steampunk corsets are brown instead of black? And why shouldn’t  heroes who pilot airships, or dream up fantastic inventions, or travel though time fall in love?

I know, I know they do all these things already and very happily on their own, but why shouldn’t they do them together? And why can’t they have steamy-hot sex in the process—without anyone pointing fingers or calling names?

I guess the truth is there is still a lot of Science Fiction in Steampunk and as the recent dust-up with the SFWA  has made perfectly clear, SF is still, in many ways, an Old Boys Club. While writing Romance…well, if I may be allowed another pun (I know I’ve probably bagged my limit of those by now!) that’s still largely women’s work, for the most part, isn’t it?

Perhaps the title I should have chosen for this post is: Can’t we all just get along? The way I see it, it’s a big enough umbrella and (with apologies to The Police) no one really needs to end up getting wet.