There is still time to get in on the drawing for the Kindle Fire, a basket of 25 e-books, or the a $25 gift card to B&N or Amazon (your choice). Just read the post, leave a comment and include your contact info.

A typical Sunday evening you can find me with my laptop open, my Kindle or Nook nearby, and the TV on for background noise. A couple of Sundays ago, this is how it went: Blah, blah, blah, blah, parallel universe, blah, blah. Say what? Back up! My interest was caught, and I watched two Nova specials back-to-back. The first was about String Theory, and the second was about Multiverse vs. Universe theory. Cool stuff.

A brief summary of string theory according to my limited understanding: Physicists used to believe that the tiniest most infinitesimal part of an atom was a single point of energy. Some now believe the smallest part of an atom is not a point at all, but a string of energy that twists, turns, loops and folds. This belief led scientists to posit that time is not linear as we imagine, but that it too bends, loops, twists, turns, loops and folds. Evidence (which is way beyond my ken) also suggests there are more than the three dimensions we are familiar and comfortable with. These theorists have identified eleven to be exact. Hmmm. It stands to reason that if there are multiple dimensions, and if time can bend back on itself, then parallel dimensions/worlds must also exist.

A brief summary of Multiverse vs. Universe theory according to my limited understanding: According to physicists and other branches of science, there are only a limited number of elements in existence. All matter is created by combining these elements in different ways. (2 Hydrogen atoms combined with 1 Oxygen molecule = water, etc.)  The explanation they gave for the existence of multiverses was profound in its simplicity and clarity. Take a deck of cards and start dealing poker hands. With a limited number of cards, after a while a pattern emerges, and you get identical hands. Look at the limited number of elements the same way. They shuffle and deal, and eventually you're going to get identical combinations. The theory? If you apply the principal of multi-combining elements, you must logically conclude that our universe has been replicated numerous times. You and I have been replicated multiple times. Our universe is one of many. We are living out our lives in another universe even as I write this. Whoa, right?


Both factions claim they are very close to proving their theory is correct. Someday we will be able to step across the time-line into another reality. Someday we'll be able to create a portal between multiverses. But for now? A fact is only a fact until proven otherwise. We used to believe the Earth was flat. We used to believe the sun was in orbit around the Earth. How we understand our reality and our place in our reality is always changing, and I find that fascinating.


In my debut novel, HEART OF THE DRUID LAIRD I guess I went with String Theory. The fae live in a void dimension. They project their desires upon the void, and this is how they create their living space. Without their magical projected energy, there is nothing in that dimension but swirling, gray mist. Ancient man once called the realm the Mists of Avalon. Now, none speak of it at all, yet it is still there, as are the beings who inhabit that mystical place. 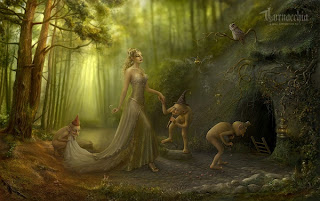