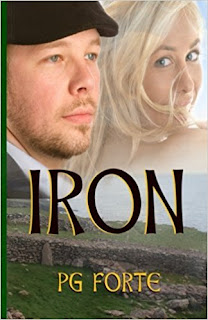 Since it's Saint Patrick's Day, I thought I'd feature the Irish-themed book I wrote, Iron.

This book is very special to me since the hero, Gavin, is a blacksmith--as was my grandfather, who was born in Ireland. Obviously, this book has nothing at all to do with my grandparents, both of whom would no doubt be appalled by most of what I write. lol!  But all the same, I swear I could hear my grandmother's voice in my head as I wrote it. The Irish cadence to the dialogue? That's all her.

Sleep did not find Gavin easily. He lay awake for a long while, studying Aislinn's face in the moonlight and brooding. She’d looked beautiful at dinner tonight, idly rolling her glass between her hands as they talked; the whiskey casting amber colored shadows against the table linens as she explained all the ways in which having a soul might aid her. She’d leaned forward earnestly as she made her case, speaking with all the persuasive passion she possessed.

And, all the while, her long, elegant fingers had cradled the glass as lightly as they might have held a frozen soap bubble, or a crystal ball—something rare and magical. As magical as she herself could be. He’d found himself staring at the glass, unable to look away; thinking of all the ways in which she and it were similar. Both were things of beauty, shiny and bright, fit for a palace; divinely inspired creations of earth and fire and breath commingled.

Both were delicate yet strong; durable unless they were handled carelessly or callously. Or cruelly. Fragile enough that, if they were treated without the respect their beauty and refined natures deserved, they would not just chip or crack, they’d shatter. Irreparably. As had nearly happened to her today in the forge. As could happen again—at any time—if the threat against her could not be finally and definitively eliminated.

She’d caught him off guard when she’d asked for his soul and even though it was clear from all she’d said that she thought it the perfect solution, at the time, he could think of nothing to say. He still could not. What answer  could he give her that he would not end up regretting?

However much he might wish to oblige her, to atone for the hurt he’d caused or repay her for all she’d given him, how could he honor such an impossible request? He had nothing to gain from such an exchange, and everything to lose.

With a soul, Aislinn need no longer answer to anyone. Endowed with free will, she could choose to disregard the geis by which her sister had all but given her to Tiernan. She could refuse Tiernan, and by extension her sister, without repercussion. She could refuse anyone. Even him—though she’d been far too careful to mention that last fact.

And, even if she were to marry Gavin—in gratitude for the gift of his soul, perhaps—what of it? She’d need be no more faithful to her vows than any human spouse. She might choose to leave him at any time and for any reason. Or for no reason at all.

Without a soul, on the other hand, she’d be forced to remain as she was: At his mercy. His to command. Bound by the iron that kept her imprisoned here. Bound by the promises he’d wrung from her today, at the point of death, and by her own words last winter. Bound by the geasa that still threatened her existence. And, perhaps most of all, bound by her abiding fear of being imprisoned in Annwn.

The fact that fear was his greatest ally in this war to keep her was a source of great shame to Gavin. He knew that a good man, one who was generous, chivalrous, disinterested, would be willing to aid her—without hope of recompense—not just in evading her enemies, but in defeating them, once and for all. Such a man would be willing to let her go, if need be, and if it was what she truly wanted; or even give up his life for her. But Gavin doubted he had ever been that good in his life, and he had no wish at all to be that man.

Currently, Iron is only available in paperback. https://www.amazon.com/Iron-PG-Forte/dp/1880370220