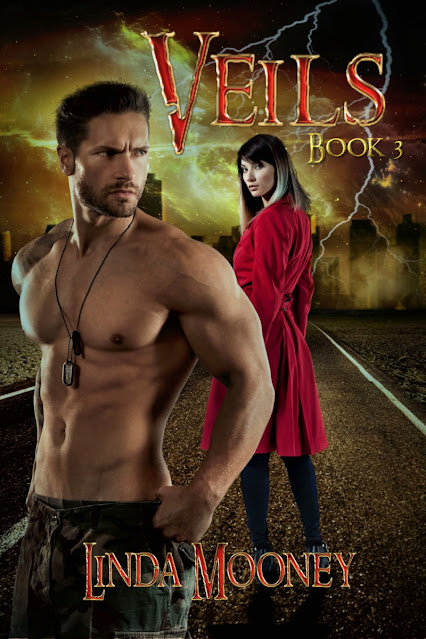 Now married, Griff and Nat couldn’t be happier to have shared the moment with their friends, but the honeymoon period won’t last long. Still plagued with the veils and acid rains, they’re just trying to do what they do best—survive.

However, things seem to be changing, improving. Cars are working again, guns are firing, there’s even electricity, but still they find themselves traveling through time. With each event, it seems they're getting closer to their original eras.

The world looks to be healing itself, and as long as they stick together, they believe they’ll make it through. The only problem is, if their theories are correct, at some point they will have to let each other go to return to their own year where it all began.

Hope prevails, but uncertainty continues to rear its ugly head. Will it ever be over? And if it does end, will they be able to reunite with their future selves?

Warning! Contains a broom, a length of twine, scientific impossibilities, a fireworks grand finale, a train, and a reason to believe the madness will soon come to an end, which gives them hope for a life together.

Tuesday November 24, 2020:  Linda Mooney treats us to a new flash fiction "The Ghost of Krismas Past"! 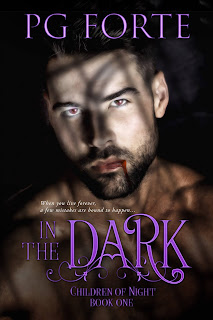 In the Dark
Children of Night 1.0
When you live forever, a few mistakes are bound to happen.
Vampire Conrad Quintano has been around for centuries -- long enough to know falling for a human is a terrible idea. Much less falling for adventure-seeking hippie Desert Rose and agreeing to raise her babies.
Raised in virtual isolation, Marc and Julie Fischer have never known their unique status in the world. But once they're in San Francisco, the family reunion is nothing like they anticipated and they're thrust into a world they're completely unprepared for.
Thursday, November 28th, 1968
Thanksgiving Day
“All I’m saying is that the picnic in the park was a total blast and you missed out on a really great party today.”
Desert Rose was pouting. Arms crossed, her posture rigid, she glared sullenly at Conrad from one end of his couch. Lying comfortably against the cushions at the other end, he smiled back at her indulgently. He hadn’t been expecting to see her here this evening. Even though she’d taken to spending nearly every weekend with him, tonight was Thursday—definitely part of the week, as far as he was concerned. In her mind, however, the fact that it was Thanksgiving apparently made it the start of the weekend.
“I told you all about it when I was here last weekend. I was really hoping you’d show. You’d have liked it.”
“Yes, I’m sure I would have.” Enough talk now. Conrad reached for the girl and pulled her toward him. He rearranged her limbs until she was reclining against his chest with her head resting on his shoulder, her long, dark hair swept to one side. Unexpected, yes, he thought, as he began to lick lazily at her neck. But definitely not unwelcome. Three days was long enough to go without. He’d grown quite addicted to the taste of her over the course of the past month—which would have worried him, if he’d been planning on turning her. He wasn’t. “I’m sorry I missed your picnic today. It sounds like it was a…real happening scene.”
A strangled noise, emanating from the vicinity of the secretary desk on the other side of the room, greeted Conrad’s observation. He glanced up, his face breaking into a wide grin at the sight of Armand’s pained expression. “A happening scene? Mon Dieu.”
“Well, it was,” Desert Rose insisted as she settled deeper into Conrad’s embrace, her eyes closed, her neck exposed. “With music and dancing and…just crowds of people. And more food than you’ve probably ever seen in your life.”
Armand’s eyes grew smoky as he gazed at the girl. His tongue danced lightly across the points of his teeth. He looked mesmerized, enchanted. He looked hungry.
Mine. Conrad stilled. It took a conscious effort to tamp down the unreasoning jealousy that was once again threatening to burn holes in his gut. Luckily, Armand seemed to collect himself before too much time had passed. A shaky sigh escaped his lips as he shook his head and went back to work, writing checks to pay the monthly bills. Conrad relaxed as well, and quietly sank his teeth into the girl’s waiting neck.
“Corn and beans and squash and cranberry sauce and those little pearl onions,” she continued her recital, in the slightly dreamy tone that indicated she was so relaxed she hadn’t even noticed Conrad’s feasting at her throat. “And mashed potatoes, scalloped potatoes, sweet potatoes, carrots, peas, three kinds of pie, a big chocolate cake. Not to mention homemade bread and biscuits and pumpkin soup. Oh, and there was even an entire turkey made out of tofu.”
“It sounds delightful.” Conrad raised his head. “Armand?”
“Oui?”
“Qu’est-ce que c’est…toe-foo?”
Armand looked up again, his face perplexed. “Je ne sais pas,” he replied with a shrug. Then, his face clearing, he snapped his fingers. “ Ah, non, non, non. Il est Chinois. It’s something to do with soybeans. A kind of a paste, I think?”
“Soybeans? Vraiment?” Conrad shook his head and went back to his meal. Soybean turkeys. What would they think of next?
Buy Links: https://www.pgforte.com/children-of-night